Promoting the friendship and exchanges between Sacramento and Jinan 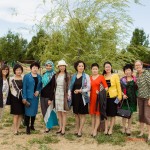 The Sister City affiliation with Jinan was endorsed by the Sacramento City Resolution on October 16, 1984. In April 1985, then-Mayor Anne Rudin signed an agreement witnessed by China’s Consul General Tang Shubei, memorializing the purpose of the Jinan-Sacramento Sister Cities Corporation. The goals were to encourage the people of the city of Sacramento and the City of Jinan to acquire consciousness of each other, and to understand one another as individuals, as members of their communities, as citizens of their countries and as part of a family of nations. Sacramento’s first delegation visited Jinan the following month to formalize the agreement with the mayor of Jinan and began what has become now more than two decades of friendship.

The first official delegation from Jinan arrived in Sacramento in 1986. The Sacramento Youth Symphony followed this 1987 with a visit to Jinan. Ninety people, mostly children, performed to the delight of the audiences in Jinan, Shanghai and other cities. In 1987 and 1989, interpreters from the Jinan Foreign Affairs Office (JFAO) came to study English and American culture in California State University Sacramento (CSUS). In 1990, a CSUS professor reciprocated by studying Chinese literature and teaching English at Shandong University.

In addition to receiving numerous delegations from Jinan, Sacramento has also sent delegations there. During a trip to Jinan in 1988, Sacramento’s delegation participated in a grand ceremony that dedicated a major sports complex in Jinan. Our delegations have included Mayors, Council members, supervisors, business people, educators, and others interested in learning more about China and fostering goodwill and friendship with the people of Jinan. The late Mayor Joe Serna Jr. led a Sacramento delegation to visit to Jinan in 1994. During our 10th year anniversary in 1995, a delegation from Jinan visited and celebrated the achievements of the relationship between the two cities. In early 1997, a graduate student from Jinan began her studies at CSUS. In May, five young award-winning artists, ages 12-17, from Jinan’s Children’s Palace, an after-school program for youngsters with exceptional artistic talent, came to Sacramento form the first student cultural exchange project in our community. In September 1999, Sacramento sent a delegation on a 17-day tour to China focused on Jinan’s annual trade fair – The Golden Autumn Festival.

The following years saw a developing relationship in the economic arena with a MOA being signed in Jinan in 2000 to conduct an agricultural exchange between the two cities. Mayor Heather Fargo in 2005 led an 18 member delegation to Jinan to attend a world-wide tourism fair. Sacramento was highlighted in an exhibit and depicted as a place to visit. Assemblyman Dave Jones visited Jinan in 2005 and enthusiastically became the spark plug to develop a discussion on a possible exchange program with the Medical School of Shandong University and the University of California at Davis Medical Center and a renewed relationship with CSUS and Shandong University.

In the past few years, Mira Loma High School and Grant High School have worked with JSSCC to promote friendship through student exchange. In 2006 and 2007, students from Sacramento attended International Children’s Festivals in Jinan and represented Sacramento in an exemplary manner. In 2008 and 2009, we continue to sponsor the trip for the middle school and high school students in the Greater Sacramento Region. Now our “Youth Ambassador” programs offer scholarship and subsidized trips for Sacramento and Jinan students and teachers to visit each other or study in each other’s city. An invitation has been sent to Mayor Zhang Jian Guo to visit Sacramento and our Mayor Kevin Johnson is invited by the City of Jinan to further depend the relationship between the two cities.

As Sacramento enters its two and a half decade of friendship with Jinan, we attempt to develop a strong individual and corporate membership base to promote exchange between Jinan and Sacramento with the hope of fostering educational, artistic, cultural and professional exchanges. Join us and become an active participant in the cultivation of friendship and understanding between the people of our cities.